Krista McDaniel is one of many  who as a child, was convicted as an adult and is now serving barbaric and inhumane sentence!
In 2002, just turning 16 yrs of age, Krista got caught up with  grown adults. Easily influenced,  vulnerable  and wanting to be “accepted,” she  was sentenced to 30 yrs with NO chance of parole due to just being in the company of BAD adults who robbed and murdered 2 convenience store workers. Unfortunately Krista was with them, but she did NOT know they were going to do this evil deed. “Guilt by association!” She spent two years in the S. C. jail until she turned 18, then sent to a woman’s prison in South Carolina for 30 yrs.
With the background life of Krista, NO father in her life, a mother who struggles to make ends meet, and out of Krista’s life most of the time, which was  NO fault of her own, Krista was left alone to do whatever she wanted.  No structure or guidance in her life, she was easily  influenced by other “adults” and unfortunately landed her in prison, facing 30 yrs with NO chance of parole.  Krista DOES DESERVE a chance, this is a grave injustice, for a 16 yr old, who was literally USED BY ADULTS, a “pawn”  for their evil acts. Krista should NOT have to pay for this mistake with her very “life” for 30 yrs.  She did NOT rob or murder anyone!!
Anyone interested in support of and/or would care to write Krista,  please contact kidsincourt1@roadrunner.com
There are a number of posts in reference to Krista McDaniel, please follow this link: http://justicewinds.blogspot.com/search?q=krista+mcdaniel
Krista’s  Advocate, Knightgale  ( who maintains her blog and has been trying for years to secure justice for Krista) has this to say:
“Have followed her case from the time of her detention to the present days. She has grown in many ways, “growing” up in a prison, facing 30 yrs with NO chance of parole. Post conviction relief request DENIED. Clemency request DENIED.  Am still seeking a “pro bono” lawyer to look at the court transcripts of this case. Such a gross INJUSTCE for this child, giving NO “chance”, mistakes made as a “child.”  The sentence is barbaric, with No compassion, NO mercy, NO credit for the 12 years already served, facing 18 more years with NO parole, for a crime itself, SHE DID NOT COMMIT. True, unfortunately she was with those ADULTS, who DID this crime!! My question is why a conspiracy and armed robbery charge??? How does the prosecutor “prove” conspiracy?? Was there a GSR performed on her clothes and hands?? S.C law says the “hand of one is the hand of all.” The background of this child, contributes, but she did NOT get to where she is today, ALL BY HERSELF.  I strongly urge the reading of all the posts located at the above URL link.” 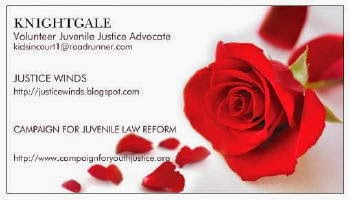 One thought on “Krista McDaniel~another INJUSTICE”